ROCHESTER — The Rochester Housing Authority has named another interim director on the heels of news of a settlement with its ousted director.

Shawn Burr of Spencerport, who has served as the RHA’s director of development and capital projects since 2008, has been named interim director, according to a Jan. 7 press release from the housing authority.

He replaces City Councilman Adam McFadden, who served on an interim basis following the dismissal of Alex Castro as executive director on Oct. 14.

According to reports, it was announced Jan. 5 that Castro had received a settlement of $135,000, which is one year’s salary. He will receive $93,000 after taxes.

Last month, the U.S. Department of Housing and Urban Development advised the housing authority to terminate its contract with McFadden because the RHA failed to follow proper procurement methods in naming him as interim director in October.

Copyright © 2022 Rochester Catholic Press Association, Inc. All rights reserved. Linking is encouraged, but republishing or redistributing, including by framing or similar means, without the publisher's prior written permission is prohibited. 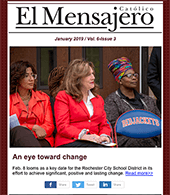